HS175: An Elite Toy! Kind of a Junior Mavic Mini

The HS175 is a fun little drone. Just connect your smart phone for FPV and a whole new set of control options.

Also included is a nice carrying case that holds everything you need to fly!

The HS175 is a folding drone and fits safely inside the case along with 2 batteries, chargers and the remote control.

After downloading the Holy Stone app. fit your smart phone in the adjustable bracket on the RC. Pair it with your drone. Calibrate the compass, and connect to the WiFi. (All very simple) the drone will automatically go into GPS mode and you're ready to fly!

I found the drone performs best in no more than 2-3 mph winds. Although I did fly in 6 mph winds with 10 mph gusts (according to my “WindCompass” app) In this scenario it tended to drift while at hover but flew strong in 100% power mode.

This quadcopter has 2 speed settings. 50% and 100%. In order to switch between these two settings simply depress the right joystick. You will hear either 1 or 2 “beeps” which indicates the speed you are in. The speed can also be adjusted by tapping the percentage icon (50% or 100%) on the app screen.

During testing I flew as high as 130ft and as far away as 300ft without losing RC OR WiFi connection. 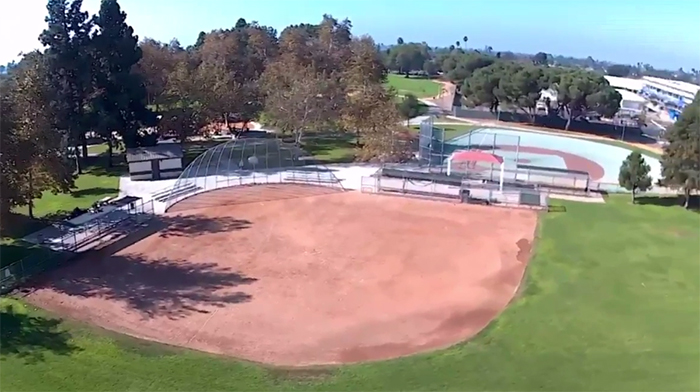 The Drone camera shoots in 2k. The picture and video quality is really good. The camera can be activated by either buttons on the remote control or on the app screen. Photos and video are automatically sent to the app and your smart phone photos. You can also purchase an SD card to install in the Drone to store pics and video.

The camera can adjust in flight up and down 90° with a button on the RC or a slide bar on the app screen.

During testing I discovered that the video image will sometimes “skip” or ”jump” when the drone is moving. Perhaps a WiFi connection issue? (I've included a video with actual footage shot with the drone).

Up to 20 Min Flight Time

The Drone comes with 2 batteries. I flew both batteries until completely drained and was getting the low battery “Beep” from the app. This gave each battery a flight time of 19-20 minutes.

These batteries take a long time to charge.

I flew until I got the low battery “beep” and each battery was completely drained. Charging time on the one battery was 3 hrs and 15 minutes. The other battery took 4 hrs to charge. I repeated this test 3 times. The batteries consistently took the same length of time to charge. Also the design of the included Chargers is problematic. An overly large USB plug makes plugging the 2 Chargers in next to each other not possible. So I could only charge one at a time. 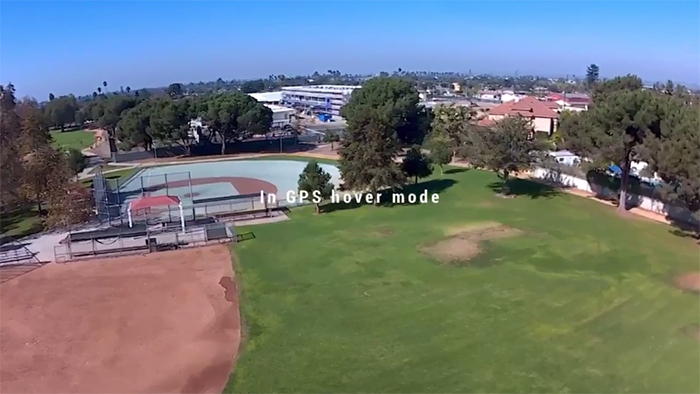 This GPS drone is capable of a number of intelligent mode functions. It's RTH function can be activated manually by depressing the button on the RC. The Drone will then turn towards home point. It will ascend to about 65ft. and fly back to home point. Next it will land on its own. Landing was pretty accurate only missing the launch point by a couple of feet.

RTH is designed to engage automatically if the drone loses connection with the remote control or if the battery runs out. I tested this myself running out the batteries several times. The Drone did go into RTH autonomously and return to home point.

Other intelligent modes that can be accessed through the app are Circle fly, Waypoint, Human tracking and GPS tracking. Also Gesture mode which allows you to take photos or video by simply standing in front of the drone. Using 1 of 2 different hand gestures you can activate the camera either to take photos or start/stop the video.

A Few Tap to Active

Circle Fly or Waypoint is activated by tapping the on screen icon at the bottom left which opens another icon upper right. Tap that icon and you get a drop down showing operation instructions. In Waypoint Tap points on the map where you want the drone to fly to and press the send icon. The Drone will ascend to about 50ft and begin flying the course you selected on the map. When it reaches the last chosen point it will stop and hover.

In Circles Fly mode tap the circle direction choice and the send icon. The Drone will fly in a circle at its present altitude until you cancel the mode by tapping the on screen icon on the bottom left. (Allow space for the drone to adjust it's position in the air as it prepares to start its circling).

Human tracking is accessed while in optical mode only. Whereas, GPS tracking obviously must be in GPS mode to function.

Human tracking uses the drones camera. Tap the HT icon on the left of the app screen when you are standing at least 2 meters from the drone. A blue box will appear around your image on the app screen. Tap it and it will turn red. The Drone will then go into HT mode and move as you do. (Caution. Allow space for the drone to adjust in the air. Especially if you’re indoors)

In GPS tracking mode the drone needs to be higher than all surrounding obstacles to activate. In my test that was about 100ft up. I then tapped the GPS tracking icon on the app screen. The Drone emitted a bright flash of light indicating it was actively in tracking mode. I then would walk to one point then another. The Drone would fly over to where I stood and hover. This function is achieved by the GPS tracking where the RC is located.

(The camera was pointed straight ahead not down onto the subject being tracked.)

It's a tough little drone as well. During testing it suffered several crashes without any damage.

All in all it's a pretty cool Drone. An Elite toy!

In some ways it reminds me of my Mavic Mini. Kind of a Junior Mavic Mini. The color is very similar as is the carrying case. Propeller design is the same. It's about the same size in my hand through it's lighter.

So I am enjoying this drone. A nice addition to my collection, thanks Holy Stone!